I’d like to say the first time I saw elephants in the wild, the ground shock and the earth rumbled. It didn’t. In fact, it was the most natural feeling in the world, to see a small herd sweep through the bushes and thorny acacia trees.

It didn’t feel like a surprise, to have these beautiful giants walk into my life — because it felt like me walking into their life was the surprising part. The earth beneath my feet, and the plants, and even the hot, dry, slightly dung-scented air, belonged to these creatures — not to me. It was far more humbling than epic. 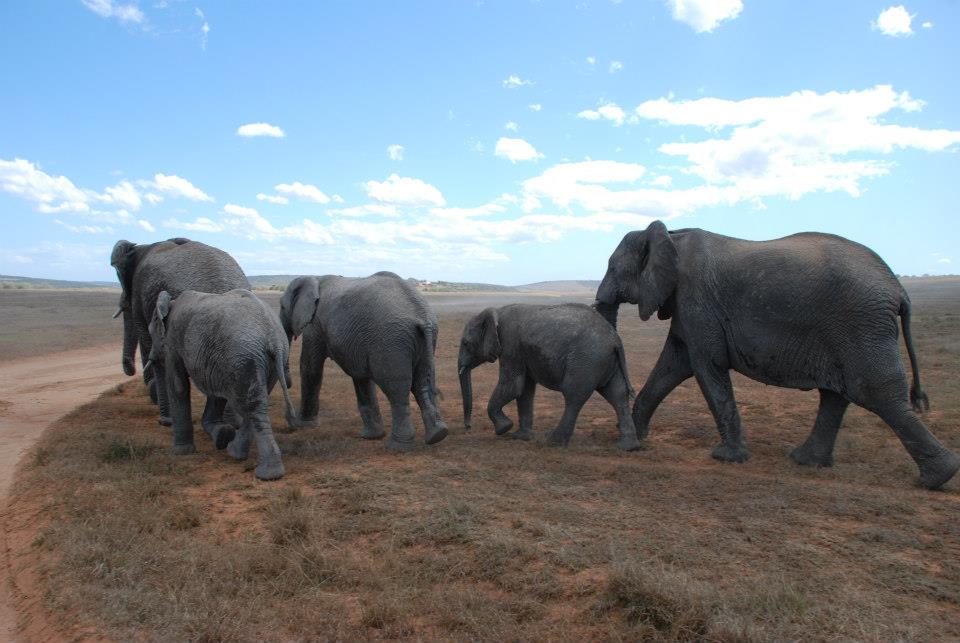 Yesterday, the 17th CITES meeting began in Johannesburg. CITES; the Convention on International Trade in Endangered Species of Wild Fauna and Flora, is a meeting between governments to reach international agreement on wildlife trade. Launched in 1975 to protect wild animals, it takes place every three years with representatives from most of the 182 Member Countries discussing whether to tighten or loosen trade restrictions on specific species.

There are roughly 5600 species of animals and 30,000 species of plants already protected by CITES, which lists threatened species in three appendices, according to how threatened they are by poaching, habitat destruction and international trade. A simple break down of these is as follows (please see here for full explanation):

This year’s meeting is the first to be hosted by an African country since the year 2000 and a record number of proposals, resolutions and decisions are expected to be made — with elephants, lions and rhinos high on the agenda.

This is week seemed like the best time to stop and think about elephants. To really appreciate their beauty and their place in Africa and Asia, and indeed on this planet that we are fortunate enough to share with them. I couldn’t have imagined a better way to do this than at the book launch of an incredible book of wild elephant photography, called Remembering Elephants. Founder of the Remembering Elephants project, Margot Raggett (pictured below), explained that all of the photographs that appear in the book were gifted by the photographers, allowing it to be sold with 100% of profits donated to Born Free Foundation, to help such elephant projects as: 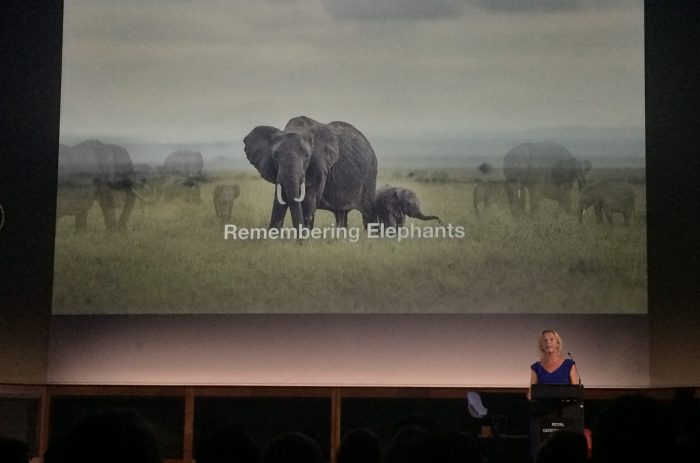 Knowing the importance of the evening and the context of the book, it was particularly poignant when Born Free Foundation co-founder Virginia McKenna explained that the level of protection that these animals receive will be determined by the 182 Member Countries at CITES over the next few days, and the European Union has officially announced it will not support the Appendix 1 ban on elephant ivory trade. Last week, however, Britain announced its decision to ban all sales of ivory that cannot be proved to be over 70 years old. Virginia took the opportunity to call for a ban on ALL ivory sales in Britain, including in auction houses, stating: “The chink in the armour is easily exploited. It is easy to label something as antique.”

Virginia addressed the audience to express her concern that at the rate at which elephant numbers are declining (in the early 20th century there were thought to be 3-5 million wild elephants, compared to an estimated 450,000 – 700,000 African elephants and between 35,000 – 40,000 wild Asian elephants alive today), these such photographs may be the only way we can see elephants.

Next to take the stage was Ian Redmond OBE, who I’ve worked alongside on previous projects (and blog posts!) relating to vEcotours. Ian was introduced as seeing himself as ‘a naturalist by birth, biologist by training, and a conservationist by necessity. This certainly came across when he spoke about the difference between the two different types of African elephant (savannah elephant and forest elephant; distinguishable by more rounded ears and brownish tusks that point down rather than outwards), yet how incredibly integral both species are to their environments and eco-systems.

I have heard Ian Redmond call elephants the ‘gardeners of the forest’ before, but thinking of them carving the landscape; be it by dispersing seeds in their dung (also a brilliant plant fertilizer), churning up and deepening water holes with their trunks or trampling down vegetation, allowing a variety of plants to grow; I truly understood the sentiment in his statement that “when you save elephants, you don’t just save elephants”.

He spoke of the underground elephants of Kitum Cave; the loss he felt at a young male, Charles (pictured above) being poached there; and how those on the ground, poaching these animals are simply desperate people, trying to make money — and how the real ‘bad guys’ are the ones buying and using these products. It was hard not to appreciate that demand for ivory ornaments and elephant parts as traditional Asian medicine really is the root cause of driving elephants to the brink of extinction.

Finally, we were left with a story that demonstrates the power of these animals, compared to that of humans, as Ian described his recent encounter in Mount Elgon, which left him rolling backwards underneath an elephant!

Ian had brought a special friend along with him for the event, one who I was introduced to at the end of the night; Archie the Elephant. Archie (the fluffy little guy sitting on my shoulder), has his own Facebook page, where updates of his adventures traveling around the world with various field biologists, conservationists, etc. will be documented to raise awareness of global wildlife issues and help tell the stories of different species and environments. The idea is, if you ‘like’ Archie’s page, you’ll learn about all sorts of wildlife stories. As someone who works in educational media, I think this is a great idea for kids! (and adults alike, really!). 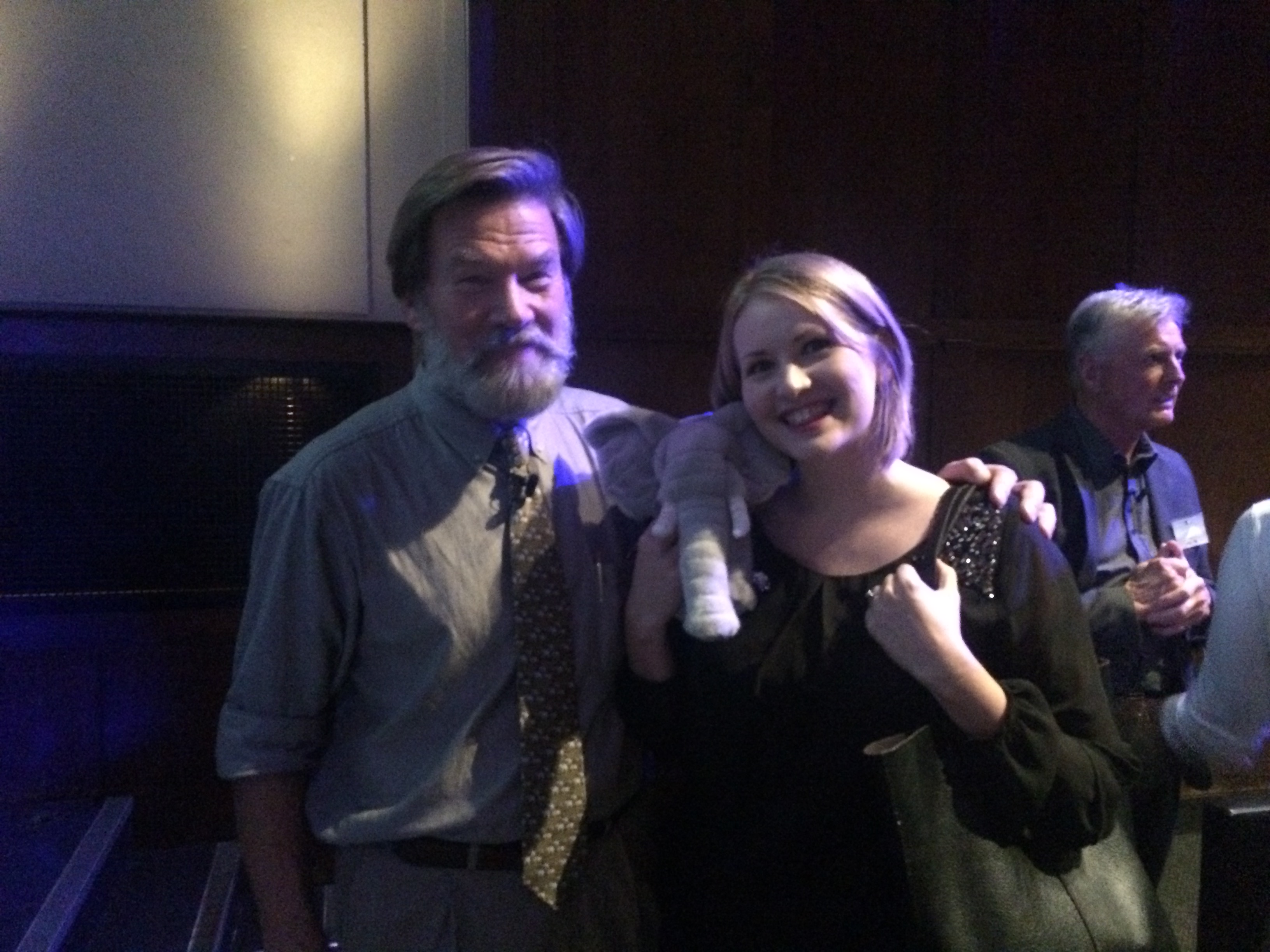 Global March for Elephants and Rhinos

Yesterday, two days after the Remembering Elephants book launch, and coinciding with the opening day of CITES, hundreds of people took the streets of London to voice there disappointment in the EU’s decision not to back the Appendix 1 listing of elephants, to call for a FULL ban in Britain on the sale of ivory, and show CITES, and the world that we want the poaching of elephants and rhinos to end. Similar marches took place in more than 130 countries around the world. 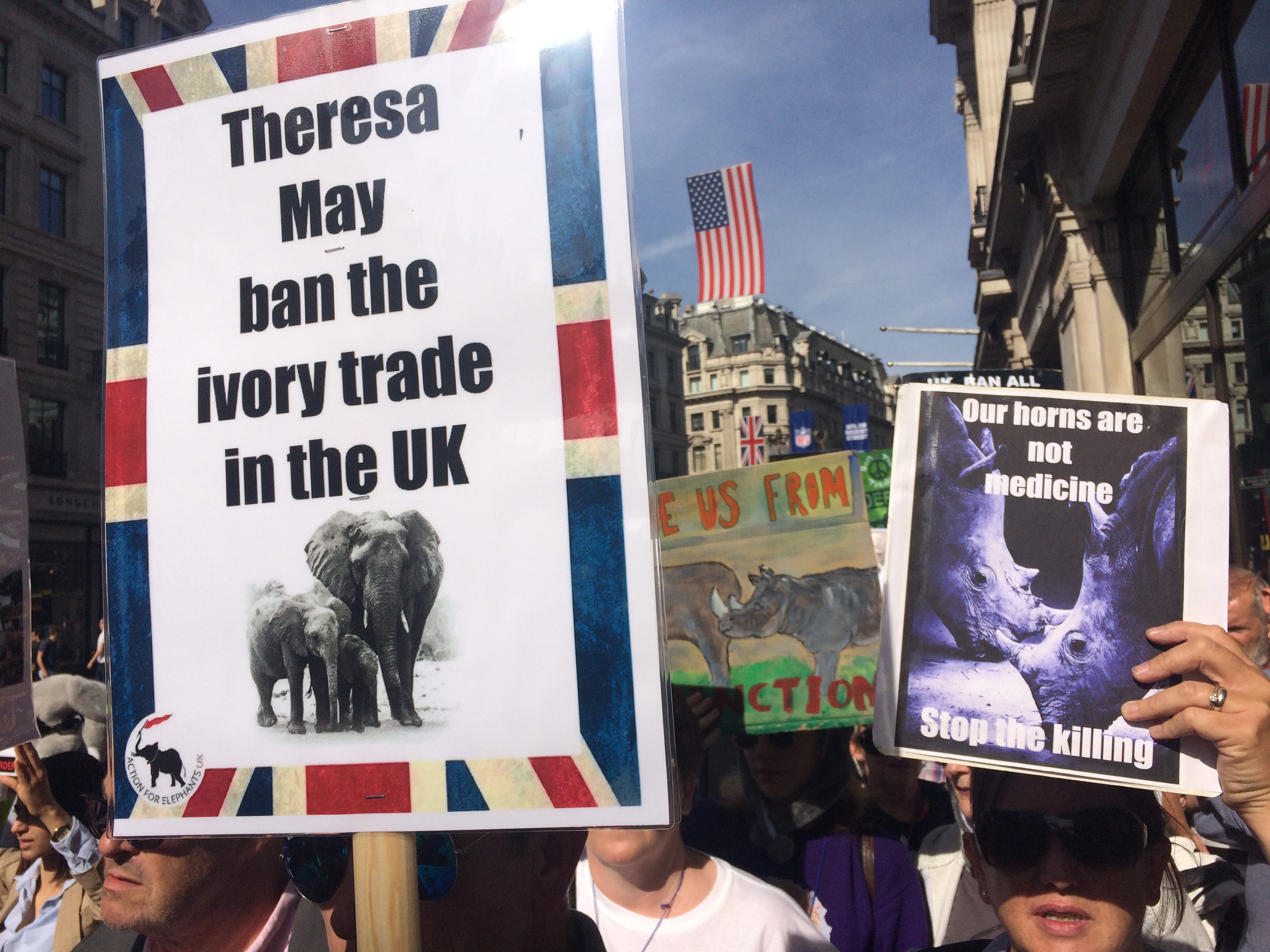 Please take a moment to listen to this passionate speech from campaigner Dominic Dyer delivered outside South Africa House, which articulates the demands of those demonstrating, and the desperate situation that elephants are facing, far better than I can.

The march, organised by Action for Elephants UK finished at Downing Street, where a number of speakers voiced the significance of elephants and rhinos to our world, our need to protect their conservation status, and the desire for a full ban on ivory sale in the UK.

Knowing that Andrea Leadsom, Minister of State at the Department of Energy and Climate Change will be attending the CITES meeting in Johannesburg later this week, a letter was delivered to Prime Minister Theresa May outlining these demands and signed by hundreds of significant figures spanning across environmental experts, television personalities and leading religious figures. The letter can be seen here in the hands of Hugh Fearnley-Whittingstall, who will soon be releasing a film on the realities of the ivory industry. 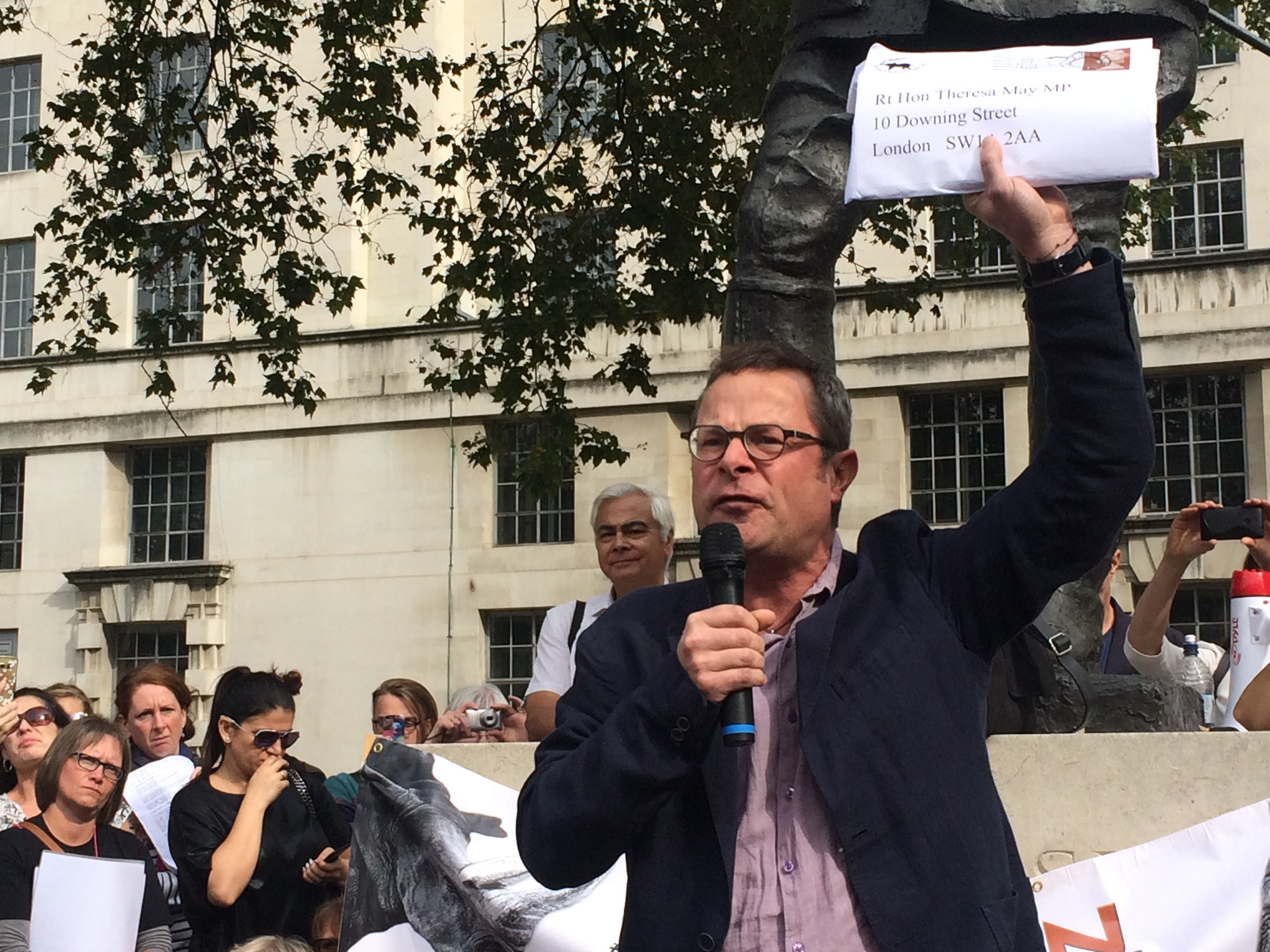 Virginia McKenna also delivered a passionate plea outside Downing Street, holding up a child’s painting of elephants and declaring that ‘when we have children caring about these animals, caring about these issues, we must win’. I really hope that the world’s governments are paying attention!

Reintroducing the Wolf to the UK – Good Morning Britain

Russian to slaughter all their stray dogs before The World Cup

Reintroducing the Wolf to the UK – Good Morning Britain

Ian Redmond runs 8km on his knuckles for GORILLAS